30.05.201909:32 Forex Analysis & Reviews: Overview of GBP/USD on May 30. The forecast for the "Regression Channels". Jean-Claude Juncker: there will be no new negotiations on Brexit 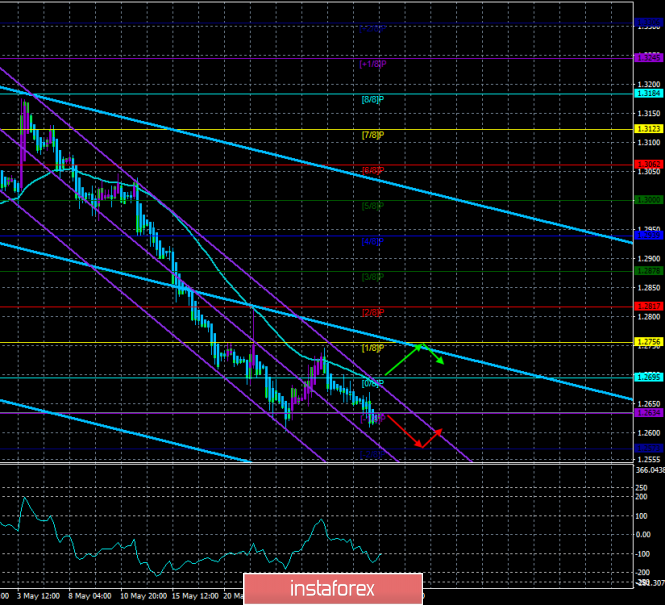 The pound continues to fall quite calmly against the US dollar, as the fundamental background for this currency remains extremely unfavorable. In principle, the main issue now is not "who will be the new Prime Minister", but "what will end the Brexit procedure in the end". Recall that Theresa May will resign on June 7, and after this date, a new Prime Minister should be elected within a week. There are more than 10 candidates for this position, and some of them have already promised to resume negotiations with the European Union if they are elected to the post of Prime Minister. The implication is that these politicians promise to negotiate better terms on the "deal" with the EU than the terms of Theresa May. However, the head of the European Commission Jean Claude Juncker dispelled these hopes of politicians. He said that there would be no new negotiations with the UK on the "deal". What do we end up with? If we start from the information available at the moment, there will definitely be no new negotiations. Parliament is unlikely to approve the option of "deal", which is now available. Accordingly, London needs either to change the composition of the Parliament, or to submit this issue to a second referendum, or to abandon Brexit, or to leave the European Union without any agreements. Which of these four options is the least dangerous for the pound sterling? We believe that the rejection of Brexit, but it is also the least likely. The more likely option – the parliamentary elections because the new Parliament could approve Theresa May's "deal". Meanwhile, the fate of the pound remains in the hands of bears. Bulls do not have enough strength even to overcome the moving.

The pair GBP/USD continues to move down. Thus, it is now recommended to sell the pound sterling with a target of 1.2573, and hold the short positions until the turn of the Heiken Ashi indicator to the top, which will indicate a correction turn.

Long positions are recommended to be considered only after the pair has been fixed above the moving average with targets at 1.2756 and 1.2817. However, at the moment, the bulls remain quite weak.

In addition to the technical picture should also take into account the fundamental data and the time of their release.

The upper linear regression channel – the blue line of the unidirectional movement.

The lower linear regression channel – the purple line of the unidirectional movement.

CCI – the blue line in the indicator regression window.

The moving average (20; smoothed) is the blue line on the price chart.

Heiken Ashi is an indicator that colors bars in blue or purple.